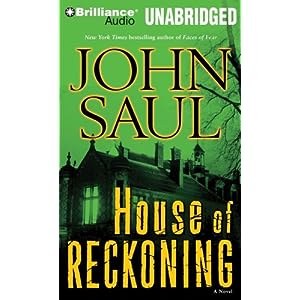 
John Saul has written 38 New York Times best selling novels which include many tales of psychological suspense and daunting thrillers.


“House of Reckoning” is about the supernatural at its macabre best – and a modern-day Cinderella story with an eerie twist about Sarah Crane, Nick Dunnegan, and an eccentric art teacher, Bettina Phillips.
These three charming characters will psych you out!  There was a strong connection between them
and peculiar unexplainable happenings. Towns’ people believed the trio was
responsible for these strange events, but this was not the case!


At the age of 14, Sarah Crane had been left with no option, but to take care of the family’s Vermont farm after her mother died. She watched over her grief-stricken father who had
taken to the bottle.  After a night of
heavy drinking, Ed Crane was jailed for killing a man in a barroom brawl. He accidentally
hit his daughter on the road while she was riding her bike to the bar. Sarah
was hospitalized with a broken hip and a broken leg.  She was left alone after her father went to
prison.


As if life wasn’t hard enough for Sarah, she was forced to live with cold-hearted and cruel foster parents. Uprooted from her home town, she had to start a new school and make new friends so that she could be near
her imprisoned father. She was the new girl in school with a limp!  Bullies made fun of her and called her a
cripple.


Nick Dunnegan, a fellow student, was a former mental patient who had been plagued all of his life with strange voices and bizarre visions. He became Sarah’s friend. Sarah had a talent for art, which impressed her art
teacher, Bettina Phillips, and thus, art class became her favorite place to be.
Bettina would become her friend as well.


The plot developed a dark aura when something strange happened in art class.  Sarah’s hands moved quickly across the canvas as she drew an image of a mansion that had been
haunting her all her life - a stone house with big shutters. After careful
review of the drawing, Ms. Phillips recognized the house as a smaller version
of her home which had been left to her by her ancestors.  It was called “Shutters” and she had lived in
it her whole life.


After being drawn to “Shutters,” Sarah and Nick joined Bettina in her home sensing something evil was stirring in this house.  What happened next makes your flesh crawl!  “Shutters” was indeed haunted by generations of the dead who used it as a gateway to make their presence known by doors
banging loudly, creating musty smells, and were monstrously disruptive.


Graphic details of death are described that are frightening and unfathomable depicting what it would be like to die if you were an evil person.   Quoting Saul:  “Then he saw it.  Ants, red ants…Mitch opened his mouth to
scream, but as soon as he did, the ants were in his mouth…he knew he would
never scream again.” Mitch was the foster parent of Sarah who became a victim
of the house.


You will want to know what happens, why these three characters are connected, and what this house is trying to tell them.  John Saul knows how to reveal the hearts of good people, expose the bad side, and reach into the unknown realms of death.  This book is a great read for thriller fans
or maybe a Halloween bedtime story.