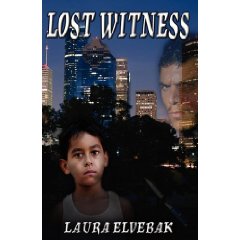 'Barky looked forward to celebrating his sixteenth birthday by getting high. He grinned at his reflection in the storefront window, admiring the Mohawk he had shaped with a discarded razor in the Shop-N-Stop restroom. With a furtive sweep of the street, he veered off onto a gravel drive behind a strip mall. Satisfied no one could see him, he two-fingered the blunt from his jeans pocket. Soo-weeeet!... A noise distracted him and he coughed out smoke. His eyes snapped open. He froze. Sounded like a rat. Barky hated rats, terrified they'd find him asleep in some doorway and use his skinny-ass body for an appetizer.'

Barky is a street kid and when he picks up a tire iron and goes in search of the rat that interrupted his birthday celebration he found instead the beaten body of a woman. But that's not all he found. Hidden behind the dumpster was the woman's child who clung to Barky like glue. Wednesday was "Street Church" night so when he spotted Niki in the crowd he decided she would be the perfect person to turn his little friend over to. Niki is an ex-police officer who works as a counselor at Open Palm, a shelter for street kids. Barky was one of her "kids" so he knew she would take good care of the little boy.

After talking to the police, Niki learns that the child's mother was a drug mule smuggling drugs from Mexico into Houston. As much as she would love to keep him, Niki knows that she must turn him over to social services who will place him in a foster home. But when he turns up missing, she will leave no rock unturned until she finds him.

Lost Witness is a spell binding story that involves murder, drugs and love. It gives you the insite of what really goes on in the minds of the kids that have been swept out into the streets by parents and society. It gives you hope that people like Niki really do exist and their devotion to these kids will making a difference. Plus, Lost Witness will make you realize that the drug dealers will stop at nothing to acquire their drugs and make their sales. This was a very intense book that I couldn't put down